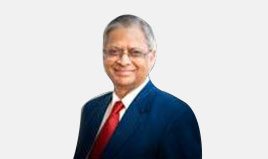 Dr. (Prof.). V.S. Mehta is one of India’s Top Neurosurgeon with extensive experience as the Head of Neuro Surgery and Chief of Neurosciences Centre. Dr. Mehta is been one of the top neurosurgeons in the country and a veteran in the field of Neurosurgery. He was elected as the president of the Neurological Society and as the President of the South Asian Neurosurgeons. He is renowned worldwide for his work in the field of Brain Stem Surgery, Brachial Plexus Surgery, Aneurysms, and Spinal Tumor Surgery. He is a well-known Brain Tumor Surgeon in India and has treated numerous Indian and International patients all across the globe for Brain disorders.

Dr. V.S. Mehta is a Chairman and HOD of Neurosciences at Paras Hospital. He has pioneered the development and the establishment of the Best Neurosciences Institute at Paras Hospital. Under Dr. Mehta’s Guidance, this has become the first hospital in the region to be equipped with Image-Guided Brain Tumor Navigation Technology for brain tumors and low-grade gliomas, intraoperative monitoring system for neurosurgery, Transcranial Doppler, to list a few, and also with the latest technology, medical expertise to detect and treat all types of neurological and neurosurgical ailments.

Dr. V.S. Mehta has been honored with various awards, including the Indian Medical Association South Delhi Branch Special Award for excellence in academics, PADMA SHRI Award by the President of India for the contribution in the Field of Medicine. He was nominated as a Founder Member of the World Academy of Neurological Surgeons in 2005, as a guest member of “The Japan Neurosurgical Society” in the year 2006 and as an International Member of the “Brazilian Academy of Neurosurgery” in 2007. He was also honored with Swasthya Bharat Samman by LIC Zee News in 2010 at Gurgaon.

Such awards and honors provide the confidence and motivation to continue clinical journey” words of Dr. V.S. Mehta.