How much does Spina Bifida surgery cost In India?

Many potential patients for surgery are a concern to know about Spina Bifida Surgery cost In India? The estimated cost of Spina Bifida surgery In India usually starts $5500 however, it may go up to as much as $7000. it depends on the hospital charges and the fee charged by the surgeon. This price usually does not cover the post-operational physiotherapy program. Additional costs also involve the diagnostics before the surgery and pre-operational consultations.

Spina bifida is a birth defect that occurs when the spine and spinal cord don’t form properly. It’s a type of neural tube defect. The neural tube is the structure in a developing embryo that eventually becomes the baby’s brain, spinal cord, and the tissues that enclose them.

Generally, the neural tube forms early in pregnancy and it closes by the 28th day after conception. In babies with spina bifida, a portion of the neural tube doesn’t close or develop properly, causing defects in the spinal cord and in the bones of the spine.

Spina bifida can go from mild to serious, depending on the king of the defect, size, location, and complications. When necessary, early treatment for spina bifida includes surgery — although such treatment doesn’t always completely resolve the problem. 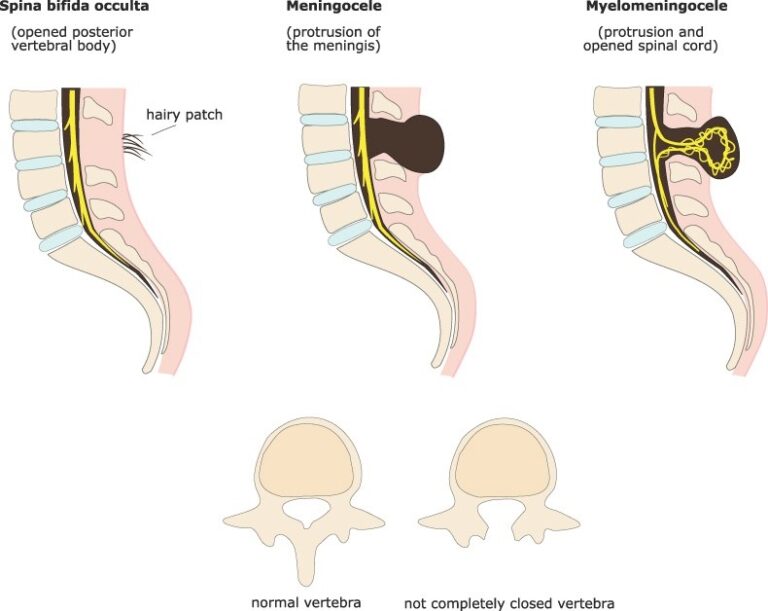 Most people with spina bifida are able to have surgery to close the opening in the spine.
But the nervous system will usually already have been damaged, which can lead to problems such as:

Many babies will have or develop hydrocephalus (a build-up of fluid on the brain), which can further damage the brain.

Most people with spina bifida have normal intelligence, but some have learning difficulties.

Spina bifida is more common among whites and Hispanics, and females are affected more often than males. Although doctors and researchers don’t know for sure why spina bifida occurs, they have identified some risk factors:

If you have known risk factors for spina bifida, talk with your doctor to determine if you need a larger dose or prescription dose of folic acid, even before a pregnancy begins.

If you take medications, tell your doctor. If you plan ahead, some medications can be adjusted to diminish the potential risk of spina bifida.

Tests and Diagnosis for spina bifida

Prenatal diagnosis: Expectant parents may be able to find out if a baby has spina bifida by:

Spina bifida in children vs. in adults

Spina bifida is not curable, so it will need to be managed your entire life.

For children, treatment focuses on determining the extent of symptoms and disabilities as they develop and preventing those that can be prevented. Proper rehabilitation and medical interventions will be determined and used throughout the child’s development. Childhood is also the time for parents and medical staff to instill a positive attitude toward treatment and management to help the child develop a positive outlook.

By adulthood, the majority of symptoms and disabilities are known. Coping mechanisms, medications, therapies, and any walking aids are normally in place. Many children with spina bifida grow up to attend college and have careers. Some also live independently.

How is spina bifida treated? 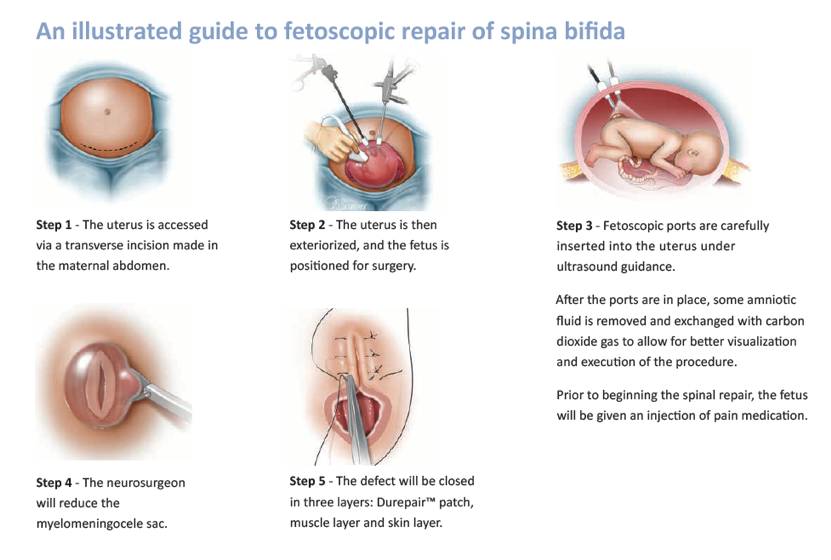 There is no cure for spina bifida. The nerve tissue that is damaged cannot be repaired, nor can function be restored to the damaged nerves. Treatment depends on the type and severity of the disorder. Generally, children with the mildest form need no treatment, although some may require surgery as they grow.

Results of a study announced in early 2020 that was funded by NIH’s Eunice Kennedy Shriver National Institute of Child Health and Human Development found that children as young as 6 years old who underwent fetal surgery to repair myelomeningocele are more likely to walk independently and have fewer follow-up surgeries, compared to those who had traditional corrective surgery after birth.

The key early priorities for treating myelomeningocele are to prevent infection from developing in the exposed nerves and tissue through the spinal defect, and to protect the exposed nerves and structures from additional trauma. Typically, a child born with spina bifida will have surgery to close the defect and minimize the risk of infection or further trauma within the first few days of life.

Selected medical centers continue to perform fetal surgery for treatment of myelomeningocele through a National Institutes of Health experimental protocol (Management of Myelomeningocele Study, or MOMS). Fetal surgery is performed in utero (within the uterus) and involves opening the mother’s abdomen and uterus and sewing shut the abnormal opening over the developing baby’s spinal cord. Some doctors believe the earlier the defect is corrected, the better the baby’s outcome. Although the procedure cannot restore lost neurological function, it may prevent additional loss from occurring.

Still, the benefits of fetal surgery are promising, and include less exposure of the vulnerable spinal nerve tissue and bone to the intrauterine environment, in particular the amniotic fluid, which is considered toxic. As an added benefit, doctors have discovered that the procedure may affect the way the fetal hindbrain develops in utero, decreasing the severity of certain complications—such as Chiari II and hydrocephalus—and in some cases, eliminating the need for surgery to implant a shunt.

Twenty to 50 percent of children with myelomeningocele develop a condition called progressive tethering, or tethered cord syndrome; their spinal cord become fastened to an immovable structure—such as overlying membranes and vertebrae—causing the spinal cord to become abnormally stretched with the child’s growth. This condition can cause loss of muscle function to the legs, as well as changes in bowel and bladder function. Early surgery on a tethered spinal cord may allow the child to return to their baseline level of functioning and prevent further neurological deterioration.

Some children will need subsequent surgeries to manage problems with the feet, hips, or spine. Individuals with hydrocephalus generally will require additional surgeries to replace the shunt, which can be outgrown or become clogged or infected.

Some individuals with spina bifida require assistive devices such as braces, crutches, or wheelchairs. The location of the malformation on the spine often indicates the type of assistive devices needed. Children with a defect high on the spine will have more extensive paralysis and will often require a wheelchair, while those with a defect lower on the spine may be able to use crutches, leg braces, or walkers. Beginning special exercises for the legs and feet at an early age may help prepare the child for walking with those braces or crutches when he or she is older.

Treatment for bladder and bowel problems typically begins soon after birth, and may include bladder catheterizations and bowel management regimens.

However, ongoing medical issues can develop throughout the life of a person with spina bifida. Further, some people with more severe disabilities may struggle socially due to stigma and have difficulty finding careers that will fit with their disabilities. However, a good support network can help ease the negative effects. 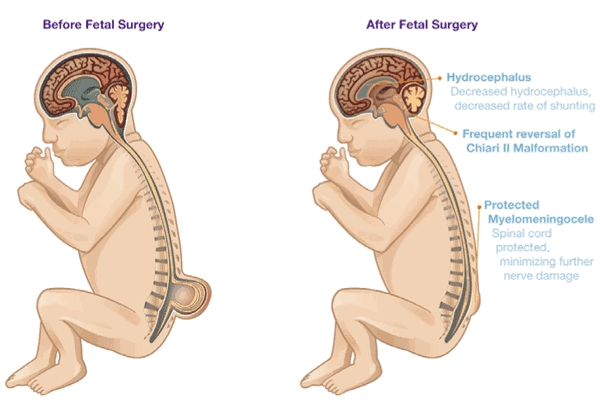 After recovery from surgery, babies born with a meningocele or myelomeningocele may need long-term care to help treat any underlying conditions that result from their spina bifida. Those with paralysis may eventually need walking aids like leg braces, walkers, or a wheelchair. Children with myelomeningocele who also have hydrocephalus will need the continuing care of a neurosurgeon, and they may have learning difficulties in school that require special services.

With the right medical care, kids can go on to lead normal, active lives. The goal is to create a lifestyle for them and their families in which their disability interferes as little as possible with normal everyday activities.

This list of possible complications may seem overwhelming, but not all children with spina bifida get all of these complications. And these conditions can be treated.

Walking and mobility problems. The nerves that control the leg muscles don’t work properly below the area of the spina bifida defect. This can cause muscle weakness of the legs and sometimes paralysis. Whether a child can walk typically depends on where the defect is, its size, and the care received before and after birth.
Orthopedic complications. Children with myelomeningocele can have a variety of problems in the legs and spine because of weak muscles in the legs and back. The types of problems depend on the location of the defect. Possible problems include orthopedic issues such as:

Shunt malfunction. Shunts placed in the brain to treat hydrocephalus can stop working or become infected. Warning signs may vary. Some of the warning signs of a shunt that isn’t working include:

Chiari malformation type II. Chiari malformation (kee-AH-ree mal-for-MAY-shun) type II is a common brain abnormality in children with the myelomeningocele type of spina bifida. The brainstem, or lowest part of the brain above the spinal cord, is elongated and positioned lower than usual. This can cause problems with breathing and swallowing. Rarely, compression on this area of the brain occurs and surgery is needed to relieve the pressure.

Tethered spinal cord. Tethered spinal cord results when the spinal nerves bind to the scar where the defect was closed surgically. The spinal cord is less able to grow as the child grows. This progressive tethering can cause loss of muscle function to the legs, bowel or bladder. Surgery can limit the degree of disability.

Skin problems. Children with spina bifida may get wounds on their feet, legs, buttocks or back. They can’t feel when they get a blister or sore. Sores or blisters can turn into deep wounds or foot infections that are hard to treat. Children with myelomeningocele have a higher risk of wound problems in casts.

Latex allergy. Children with spina bifida have a higher risk of latex allergy, an allergic reaction to natural rubber or latex products. Latex allergy may cause rash, sneezing, itching, watery eyes and a runny nose. It can also cause anaphylaxis, a potentially life-threatening condition in which swelling of the face and airways can make breathing difficult. So it’s best to use latex-free gloves and equipment at delivery time and when caring for a child with spina bifida.

Other complications. More problems may arise as children with spina bifida get older, such as urinary tract infections, gastrointestinal (GI) disorders and depression. Children with myelomeningocele may develop learning disabilities, such as problems paying attention, and difficulty learning reading and math.

Q: What is neural tube?

A: The neural tube is the embryonic structure that develops into the baby’s brain and spinal cord and the tissues that enclose them. Normally, the neural tube forms early in the pregnancy and closes by the 28th day after conception.

Q: How can spina bifida be prevented?

A: Many cases of spina bifida can be prevented if women of childbearing age take folic acid every day before pregnancy and continue to take it throughout the first trimester. Because many women don’t find out that they’re pregnant until 4 to 5 weeks into the pregnancy, it is important to start taking folic acid before becoming pregnant. This provides the best protection for an unborn baby.

Q: What are the natural sources of folic acid?

Q: What is the goal of spina bifida treatment?

A: The goal of spina bifida treatment is to create a lifestyle for patients in which the disability interferes as little as possible with normal everyday activities.

Q: Why does the amniotic fluid contain elevated AFP in cases of spina bifida?

A: The amniotic fluid contains an elevated amount of AFP as it leaks into the amniotic sac.

Q: Can children with Spina Bifida grow up and live full lives?

Q: What is the team of specialists working with patients of spina bifida?

Q: What is the long-term prognosis for children with spina bifida?

A: After recovery from surgery, babies born with a meningocele or myelomeningocele may need long-term care to help treat any underlying conditions that result from their spina bifida. Those with paralysis may eventually need walking aids. With the right medical care, kids can go on to lead normal, active lives.